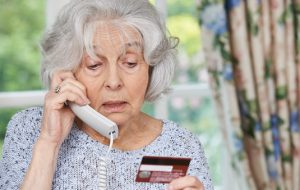 It’s an unfortunate fact that seniors are prime targets for scammers. They are perceived as being more trusting and many of them have acquired savings and valuable assets to help get them through retirement. The combination is too tempting for many scammers to resist. Below are the five most common scams targeting seniors and how you can avoid them.

Everyone likes to win. With all the stories of big lottery winners taking home millions of dollars, it’s exciting to think about what we would do if we won a lottery or giveaway of some type. Scammers take advantage of this by contacting unsuspecting targets and telling them they’ve won some sort of sweepstakes, but with a catch: the target has to pay to cover the taxes and fees before they can get their prize.

Winners never pay in order to receive their prize. That would defeat the purpose. Legitimate sweepstakes and lotteries have other forms of income to pay their bills, such as the tickets purchased by everyone who enters the lottery. Any time someone tells you that you have to pay to get a prize, hang up and report the incident to the National Adult Protective Services Association (NAPSA) right away.

Because many seniors are more concerned than ever about saving/investing for retirement, they are prime targets for investment fraud. Scammers will often call the target claiming they have a great investment opportunity for them with little-to-no risk and big returns.

If something sounds too good to be true, it probably is. Always consult a reliable, trustworthy financial analyst before making any big investments.

You Haven’t Paid Your Taxes

This scam has been targeting all age groups – not just seniors. Someone calls pretending to be from the IRS, saying the target has not paid their taxes, and if they don’t pay immediately, they’ll face serious consequences, such as a revoked drivers’ license or arrest.

The IRS does not call or email citizens. They use the postal service, and they should never be pushy or aggressive, which scam callers usually are to intimidate their targets into paying up. If you get a call or email claiming to be from the IRS and threatening you for not paying your taxes, feel free to hang up or delete the email, because it’s not legitimate.

I Need You to Bail Me Out

Another common scam is when the conperson calls pretending to be a relative who has been arrested abroad and needs to have money wired to them to bail them out.

In reality, that relative may never have been to that country at all. Be sure to contact other family members to confirm that person is really there and that the situation is legitimate. No one wants to leave a family member hanging in their hour of need, but you should never wire money anywhere without first confirming the person is who they say they are.

We Can Fix Those Windows For You

Some scammers show up on your doorstep offering home repair services you don’t need … or didn’t think you needed. These scammers get their targets to pay upfront for work that will be done at a later date. In reality, the work is poorly done or never done at all.

Never pay for services before you’ve received them. Most licensed contractors don’t go door-to-door soliciting work, but if you’re not sure, you can always ask for their business card and do your own research later.