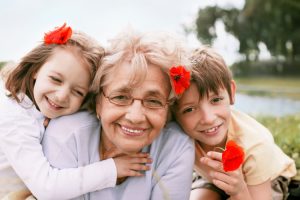 So, it stands to reason that looking after grandchildren could help ward of Alzheimer’s and dementia, right?

In fact, the science supports this theory. In 2014, the Women’s Health Aging Project (WHAP) published the results of their study looking at the cognitive function of more than 180 women, from the ages of 57 to 68, who regularly helped look after their grandchildren. The WHAP gave the participants three different mental acuity tests throughout the duration of the study in order to measure the women’s working memory and mental processing speed. The study found that the women who helped look after their grandchildren one day per week performed significantly better on the mental agility tests, suggesting they might have a reduced risk of Alzheimer’s.

The women who helped look after their grandchildren for five or more days per week performed worse on the mental agility tests, which initially suggested that they might be at a higher risk of developing some sort of neurodegenerative disease. But on closer inspection, researchers noticed that the participants who looked after their grandchildren more often tended be older and have lower levels of education, both of which tend to contribute to mental decline. Once those factors were taken into account, they found the women looking after their grandchildren five or more days per week actually performed better on verbal fluency tests. The only area where they suffered a decline was in their ability to conduct numerical reasoning, which could be a symptom of fatigue or stress resulting from caring for children on a daily or near-daily basis.

Although no one is sure why this link between grandparenting and Alzheimer’s exists, some have suggested that the increase in social interaction is key to warding off a sense of isolation, depression, and other mental disorders.

The Institute on Aging at Boston College conducted another study that looked at the habits of almost 400 grandparents and more than 300 grandchildren over a span of 19 years. They found that the important factor appeared to be the bond between the grandparents and grandchildren – the stronger the bond, the better off the grandparents were. This remained true of grandparents who both gave and received support, so if you have an aging parent or loved one who needs a little help in their day-to-day activities, getting your kids or nieces and nephews to help out could turn out to be beneficial for everyone.

There aren’t as many studies showing how grandchildren benefit from spending time with their grandparents, but there are plenty of studies showing that having close ties to family and a strong support group at home tends to lead to better performance in school and more success later in life. There’s no reason grandparents can’t be a part of that equation.