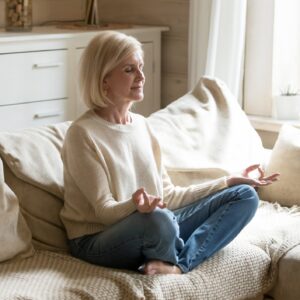 What started out as a fringe practice used by a few to maintain a sense of calm has become widely adopted, with scientific evidence to support the idea that it provides many more benefits than just helping you calm down when you’re stressed. While meditating regularly provides benefits to people of all ages, it can be particularly beneficial to seniors. So, whether you’re an older American and/or you have loved ones who are older Americans, consider these benefits when thinking about adding meditation to your daily routine … or convincing them to add meditation to their routine.

Delays the Onset of Dementia

High blood pressure is a common symptom of aging, and a dangerous precursor to things like stroke and heart attack. By actively meditating for a few minutes every day, seniors can keep their blood pressure under control. It’s not a replacement for blood pressure medication, but it’s a great addition to any routine prescribed by a doctor to get and keep your blood pressure down to a healthy level. As with Alzheimer’s/dementia, meditation might not cure you of your high blood pressure, but with regular practice, it might be able to delay the need for medication for a while.

Reduces Your Risk of Contracting a Stress-Related Illness

Many of the most common chronic illnesses are at least partially due to stress. We mentioned high blood pressure (a.k.a. hypertension), but other illnesses, such as high cholesterol and diabetes also seem to have roots in stress, at least to an extent. Meditation can’t necessarily cure you, but when practiced regularly, it can delay the onset of stress-related illnesses, and help mitigate the effects of a stress-related illness after you’ve already started showing symptoms.

By helping you stay calm, meditation can help keep your cortisol levels low. Cortisol is the hormone produced and released by your body when you’re under stress. It’s also known as the “fight-or-flight” hormone, but with many of us feeling stressed in ways that involve neither fighting nor fleeing, we end up in a near-constant state of stress, which means our body is pumping out cortisol continuously. Since cortisol inhibits the immune system’s ability to respond to threats to the body, those of us who constantly feel stressed are significantly more likely to get sick than those who meditate on a regular basis.

Meditating is just one brain exercise that provides health benefits to seniors, and as experts in assisted living, we don’t stop at meditating. Our new memory care wing has a host of mental activities to help mitigate the effects of Alzheimer’s and other forms of dementia. If you want to know what else we do to keep our residents safe and healthy, don’t hesitate to reach out.