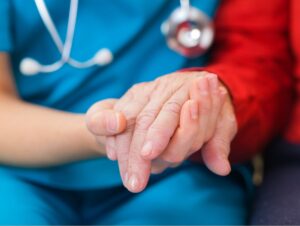 A diagnosis of Parkinson’s disease is always scary, but it can be even more intimidating if you don’t know what the diagnosis really means. You might have heard of Parkinson’s causing tremors and mobility issues, but if that’s all you know about it, you probably have a lot of questions, especially if you or a loved one has recently been diagnosed with Parkinson’s disease. While we can’t tell you everything about the disease in a blog post, we can give you an idea of some of the things you can expect from a Parkinson’s diagnosis.

While tremors and mobility issues are probably the most well-known symptoms of Parkinson’s disease, they’re not the only indications that something might be wrong. Before the disease reaches that stage, many patients experience loss of smell, constipation, vivid dreaming, and their handwriting might become very small.

Cells in the substantia nigra section of the brain are responsible for producing dopamine, which helps the brain control movement of the body. When these brain cells start to die, Parkinson’s disease develops, and it is the reduced levels of dopamine in the brain that lead to the tremors and loss of motor control that tend to characterize Parkinson’s disease.

No one knows what causes Parkinson’s disease. Based on what we know so far, the best guess scientists can make is that it’s a combination of environmental factors and genetic predisposition, but so far the exact causes of Parkinson’s disease remain a medical mystery that has yet to be solved.

Because Parkinson’s develops when certain brain cells start to die, it’s difficult to diagnose when the patient is still living. In order to diagnose a patient with Parkinson’s disease, a doctor would need to conduct a physical exam, as well as a variety of tests to determine whether two of the four main symptoms are present: tremors/shaking, slow movements, rigid limbs and/or torso, and difficulty balancing.

As with Alzheimer’s and dementia, there is no cure for Parkinson’s, although the progression of the disease can be slowed down with the help of drugs that can mimic, or even replace dopamine. Exercise is also a critical factor for managing the disease and mitigating the effects of the loss of mobility and balance caused by the disease. In some cases, deep brain stimulation surgery has also proven effective in combatting the disease.

Whether you or your loved one is suffering from reduced mobility, cognitive decline, or both, we can come up with a plan to help them here at Stillwater Senior Living. Everything from our Senior Messages to our new Lakeside Memory Care Neighborhood is designed to help our residents age in comfort and with dignity.