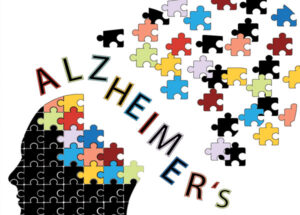 Most people experience some cognitive decline and inability to remember events and details as they age, and some of that is normal, but sometimes it can be an indication of something much more serious. If you have an older American in your life, how can you tell if their memory loss is just a normal part of the aging process, or a sign of dementia or even Alzheimer’s?

While the only definitive diagnosis of Alzheimer’s has to be done postmortem, here are some indications you or your loved one might be experiencing some of the early signs of Alzheimer’s Disease.

As previously mentioned, a certain amount of memory loss as we age is normal, but if someone finds themselves unable to remember recently learned information, important dates or events, asking the same question multiple times, and/or increasingly relying on memory aids (such as reminder notes or electronic devices) that could be a sign something’s wrong. An increased reliance on friends and family members for tasks they used to be able to handle on their own is also an indication of a serious problem.

By contrast, occasionally forgetting dates or names, but remembering them later, is a more normal symptom of the aging process and not necessarily an indication that anything is wrong.

Someone who struggles to follow a plan or work with numbers might be showing early signs of Alzheimer’s. Even simple, daily tasks such as following a familiar recipe or paying bills can become a struggle to someone in the early stages of Alzheimer’s. Difficulty concentrating and taking much longer to perform familiar tasks are also signs of serious cognitive decline.

3) Forgetting the Time or Place

Occasionally forgetting the date or the day of the week is normal, but when someone doesn’t even know what season it is or has trouble with the passage of time in general, that’s usually an indication something is very wrong. Forgetting where they are or how they got there is also an early indication of Alzheimer’s.

Caring for someone with Alzheimer’s or dementia requires special training and is not something you should try to deal with on your own. Our new memory care wing is designed to help our residents continue living life to the fullest, regardless of their memory challenges, while delaying the progression of the disease as much as possible. Please contact us today to schedule a tour. 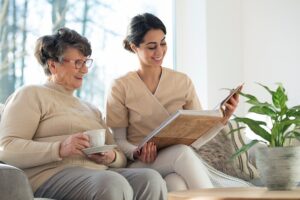 Caring for an aging loved one is always challenging, but it can be especially challenging if they have Alzheimer’s or another form of dementia. They forget things and get confused, and that can be frustrating for everyone. But getting frustrated only makes the situation worse, so get creative with ways to alleviate, or even avoid that frustration. Doing so can require some creativity, so we’ve come up with a few ideas we hope will help and might even inspire you to come up with some other creative ideas for caring for a loved one with dementia.

Patients in the later stages of dementia tend to lose both the power of speech and the ability to process language (although those two things are separate and don’t necessarily happen at the same time). To try and compensate for it, using pictures whenever possible is a great way to keep your loved one happy and engaged. You can load hundreds of photos onto a digital picture frame and have it display them on a loop. Some digital picture frames even play music alongside the photos, which is another great way to keep your loved one calm.

Use Photos Instead of Names When Possible

Smartphones are great for their ability to pair pictures with names in our contact list, making it that much easier to identify the people we’re trying to reach. If your loved one doesn’t have a smartphone, see if you can find a phone that has space for pictures instead of names on the speed dial list so your loved one doesn’t have to struggle with names they can’t remember when they need to reach someone.

Things tend to be most frustrating when you try to convince them something they know is not the case, or tell them they can’t do something. Rather than fight it, accept their reality and come up with reasons not to do something that fits their reality. For example, if they want to reach someone who is long dead, just tell them the person is unavailable. If they want to drive, tell them the car is in the shop instead of arguing with them. It will make things so much easier and more pleasant for everyone.

Get a “Dementia Clock”

A “dementia clock” is a clock that displays the date and day of the week, in addition to the time, and can be seen from across the room. This way your loved one doesn’t have to constantly ask what time it is or what day it is, they can just look up and act like they knew the answer all along.

We did a whole blog post on how to avoid falling hazards, but lighting is also key to avoiding falls and injuries, so get lights with motion sensors that light up when someone enters the room. This avoids fumbling for switches and makes it less likely your loved one will try to make do in the dark when they can’t find the switch.

Get them a cane and/or a walker, too. Even if they’re steady on their feet now, that can change quickly, so make sure you’re prepared now.

We have a lot more tips for caregivers responsible for a loved one at home, so don’t hesitate to reach out if you need some more pointers, or if you think it might be time for assisted living.

Watch this video to get a sneak peak of our Memory Care Neighborhood!