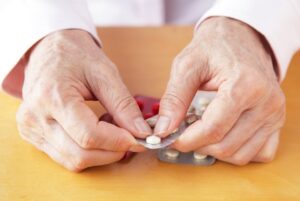 Dementia is used to refer to all kinds of memory loss as we age, but there are different kinds of dementia, each with different causes, and (to an extent) some variation in their symptoms. It’s important to know the differences so that, if you or a loved one is diagnosed with a particular kind of dementia, you know what to expect. So let’s go over what you need to know about vascular dementia, including what it is and some of the most common symptoms associated with this particular disease.

The two most common causes of vascular dementia are stroke and blood vessels that have become partially or completely blocked, or have been chronically damaged.

Who’s at Risk for Vascular Dementia?

Anyone who has had a history of heart disease, including atrial fibrillation (a kind of arrhythmia), strokes, or ministrokes (such as transient ischemic attacks, or TIAs) are also at an increased risk of developing vascular dementia.

Other common risk factors include high blood pressure, high cholesterol, obesity, diabetes, smoking, and atherosclerosis (which is when cholesterol and/or plaque build up in the arteries, thereby restricting blood flow).

The symptoms of vascular dementia are much like the symptoms of other forms of dementia, including memory loss, confusion, difficulty concentrating, difficulty making decisions, restlessness and agitation, as well as depression or apathy.

Other common symptoms of vascular dementia include an unsteady gait and the need to urinate suddenly and/or frequently, potentially even losing the ability to control when they urinate.

If you have a family history of vascular dementia, you’ll want to take extra steps to take care of yourself and stay healthy. While there is no sure way to prevent vascular dementia, you can benefit from developing and maintaining the same healthy habits that can help protect you from other forms of dementia: keeping your blood pressure at a healthy level; eating a low-sugar diet to control diabetes if you’ve been diagnosed, or preventing diabetes if you have not been diagnosed; quit smoking if you’re a smoker, if you’re not a smoker, keep up the good work; exercise regularly; and try to maintain healthy blood cholesterol levels.

If you have a loved one who is already exhibiting symptoms of vascular dementia, or any other kind of dementia, and you can’t look after them 24/7, we can.